Multi-story car parks have been described as built to building standards but exposed to conditions where more normally more substantial civil engineering structures would be employed. In other words, multi-storey car parks are predominantly open to externally exposed environments with weathering and the full extremes of daily temperature cycles according to season, as well as the static and dynamic loading of frequent traffic with vehicles parking, turning, stopping and starting etc., plus the additional stress of de-icing salts spread on the decks for slip resistant and also brought in by vehicles in the winter months.

The parking decks of multi-storey car parks, as well as trafficked podium decks and concrete roof slabs used as car parks, such as those over occupied areas below as part of residential, commercial, retail and other developments, are all basically formed as large areas of reinforced concrete. 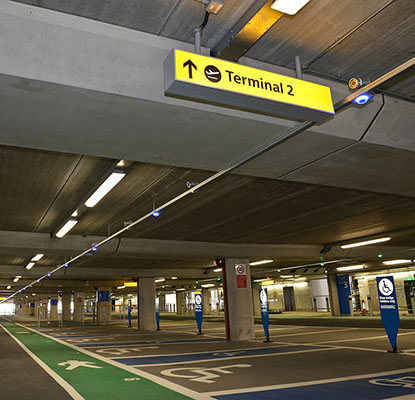 These concrete slabs are then subject to thermal movement due to their direct exposure to the elements and weathering with the resulting wide temperature variations. These externally exposed parking decks in particular, are subject to with deck surface temperatures in the UK that have been measured from as low as -15°C to more than +50°C, with the numbers of readings close to these former extremes now not uncommon over a full year – and throughout much of the UK. Another important factor is the rate of change, for example when a sudden rain shower or even a hailstorm occurs on a deck that has been exposed to several hours of warming sunshine, the surface temperatures can drop from more than + 30° - 40°C, down to nearer O° - 5°C in just a few minutes, thereby causing thermal shrinkage and additional stresses, both across and within exposed parking decks. All the different thermal movement effects on parking decks, are in addition to whatever movement is simultaneously imparted by any other influences, such as the vibrations, static and dynamic loadings imposed by the vehicular traffic standing / parking on and moving across the decks and up and down their access ramps.

Car park deck joints must be designed, detailed and installed to successfully accommodate the total calculated movement effects of these influences, plus to resist direct exposure to the elements, including UV light and weathering, as well as to resist any accidental spillages of automotive fluids – from different fuels and hydraulic oils to detergents and cleaning products etc. 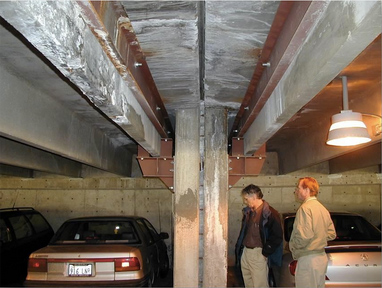 The most frequent and visible problem and most commonly leaking joints in car parks are the deck movement joints; basically, the horizontal expansion joints intended to accommodate the anticipated movement and that cannot be avoided by design. Therefore, they must be formed in the decks and sometimes also in the ramps and must therefore withstand the stress of direct exposure and trafficking by the vehicular traffic. In some structures this can also include trafficking by heavy goods vehicles, such as in the delivery and service or supply areas that are typically required at retail and other building developments.

As car parks are now an integral part of urban life, everybody has an interest in preventing damage from water and de-icing salt penetration into or through the joints in car park decks – Car park owners, operators, and the users. The potential damage and deterioration that water and water borne salt ingress can cause for the car park structure, the dangerous conditions created for pedestrians and the damage caused to car paintwork from cement alkali leaching and efflorescence nuisance below leaking joints – All of which can soon result in considerable additional costs and claims (then much higher costs) for owners and their car park operators. In addition, this damage danger and repairs cause an unsightly appearance, considerable inconvenience and wasted time for everyone involved, as well as the time and effort to repair and handle these situations, including to process the claims of course!

Fortunately, Emseal has developed a complete range of wide and high movement capability expansion joint system sealing solutions for all areas of car parking structures. Whilst some of these are specifically designed to meet the requirements for the critical trafficked deck expansion joints, there are Emseal solutions for all the other areas of the facility, such as for movement joints in the exposed external facades.

This is a very unusual accolade, because the requirements of new construction and refurbishment projects can seem to have different needs and so their requirements almost diametrically opposed. So - How is this possible? 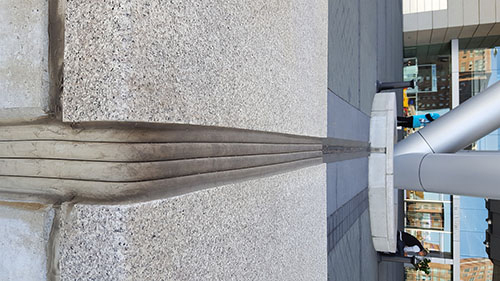 - This is because there are some important similarities, as well as differences, between the requirements for car park deck joints in new construction and in refurbishment projects. Obviously, the end performance and durability requirements are similar, and the installed joint systems must accommodate the anticipated movement and traffic, whilst also maintaining a watertight seal, as well as meeting any other specific project demands, such as fire resistance for example. However, there are also some other less obvious similarities in the requirements when we look a little deeper into their respective construction methods and the optimum installation processes for both new and refurbishment deck joints:

This ’rebated box-out’ aspect on both new and refurbishment projects, is one of the key reasons that the patented Emseal SJS Systems is ideal and cost effective for car park deck joint sealing. Emseal SJS Systems include unique integral cover plates and require no expensive and potentially damaging mechanical fixings. As a result, they are much faster to install and cost effective for both new and refurbishment projects, saving very significant time and cost over other deck sealing systems:

Emseal SJS Systems require no drilling and mechanical fixings, as they are securely bonded into the structure and their unique integral cover plate is mounted in the central spline of the system itself. This innovative design also reduces stress transmission to the structure during the whole of the systems long service life, as well as eliminating the possibility of unnecessary structural damage and the potential for early onset corrosion.

These very significant advantages were highlighted in the two recent UK projects outlined below: 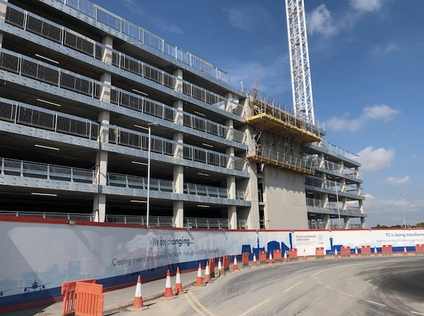 The Emseal SJS movement joint system was selected as the best solution for Manchester Airport Terminal -2 Car Park decks, because it enabled simplified site construction and concreting works with faster and easier achievement of levels and tolerances, without any complex joint rebate formwork, just forming the joints to line and level with adjacent structural slabs. The SJS system installation by the NCC trained specialists from Thelwell, was then also easily integrated with their deck coating works, plus as this system requires access from the topside only, this allowed other trades and finishing works to continue below without interruption or delay. All of this despite the onerous cold and wet weather conditions at the time of installation (even for Manchester!)

These advantages and resulting benefits to everyone involved are the reason that the Emseal SJS System is frequently said by many people to be: “The Best Car Park Deck Movement Joint Sealing Solution for New Construction Projects”

Elmsleigh Shopping Centre Service Deck Joints – In early 2019 Cemplas Waterproofing and Concrete Repairs Ltd., completed the replacement of failed and deteriorated mechanical movement joints on the Primary Service Decks at Elmsleigh Shopping Centre, which is a popular retail destination in Staines, Middlesex. The retail units on the ground and first floors are supplied via these service decks, which are also used for car parking, and so the decks are subject to almost continuous loading and traffic from the complete range of road vehicles, up to and including frequent visits from the UK’s maximum sized 40 tonne, articulated HGV’s.

Unfortunately, despite past attempts at repair and replacement of the deck joints with traditional mechanical compression joint sealing systems, there had continued to be water ingress into several of the different retail and storage units below. This had caused problems of disruption, damage and cost for the tenants, the managing agents and the owners. Cemplas were appointed to remove and replace all of the troublesome longitudinal and transverse movement joints and the Emseal SJS system with its integral cover plates was selected. Cemplas past experience and the Project Engineers investigation and assessment, showed that the Emseal SJS system was the best solution and to meet their stringent new joint sealing requirements to safely and securely withstand the frequent, heavy traffic loads.

Once again because installation was only necessary from above on the topside only, Cemplas were also able to carry out the works quickly and keep disruption to the retail tenants to an absolute minimum. Once again highlighting that indeed the Emseal SJS System is also: “The Best Car Park Deck Movement Joint Sealing Solution for Deck Refurbishment Projects”.

Emseal SJS System installed in Parking decks even under HGV’s

For more detailed information on these specific projects, please refer to the Case Studies Page

For specific advice to solve your car park deck expansion joint sealing requirements, please call 01257 266696 or you can email us at NCC Movement Joints for more specific project support and assistance: technical@emsealservices.co.uk